Get ON1 Photo RAW for Mobile 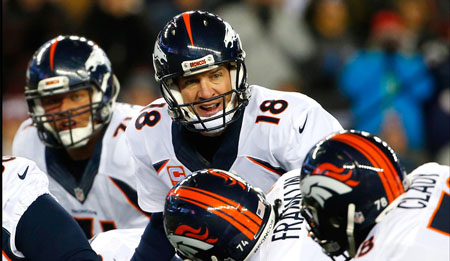 Interview with photojournalist and ON1 user Winslow Townson

Winslow Townson is a Boston based freelance photographer who has been photographing news, sports, features and stories for over 25 years. His journalism background allows viewers to personally experience the passions of the people and places he covers.

Among his current client list you will find The Associated Press, Sports Illustrated, The Boston Globe, Discover Magazine, the Boston Symphony Orchestra, the Boston Pops, USA Today Sports, Adidas, Major League Baseball and the Boston Red Sox.
His talent at covering all sporting events brings him from home openers to championships. His coverage includes The Olympics, World Cup soccer, Super Bowls, The NBA Finals, The World Series, The NCAA Final Four, Stanly Cup Finals, Triple Crown Horse Racing and NASCAR. In addition to professional sports, Winslow continues his passion for shooting high school and college games.
When did you first pick up a camera? And was there a moment you wanted to pursue this as a full-time career?
I started using a Canon AE-1 in high school and continued taking pictures through college for the school newspaper. After college I began working at a Boston TV station in traffic which means scheduling commercial breaks. After two years [I] realized it wasn’t what I wanted to do. It wasn’t creative enough [for me]. So I went back to one of my college professors and he gave me a contact at the UPI wire service (this is in 1986) in Boston. So, I guess it took actually trying something else to make me realize that I really wanted to pursue photography.
You’ve had the opportunity to cover Super Bowls, what is your approach to shooting a game of such magnitude?
I try to approach every game the same, whether it’s preseason, postseason, or the Super Bowl. And that’s the same [approach] for every sport at every level. After all, once the ball is kicked off it is just another football game, no matter what the stakes may be. But this is one of the challenges facing photojournalists, to keep calm, concentrate and stay focused no matter what the circumstances are. 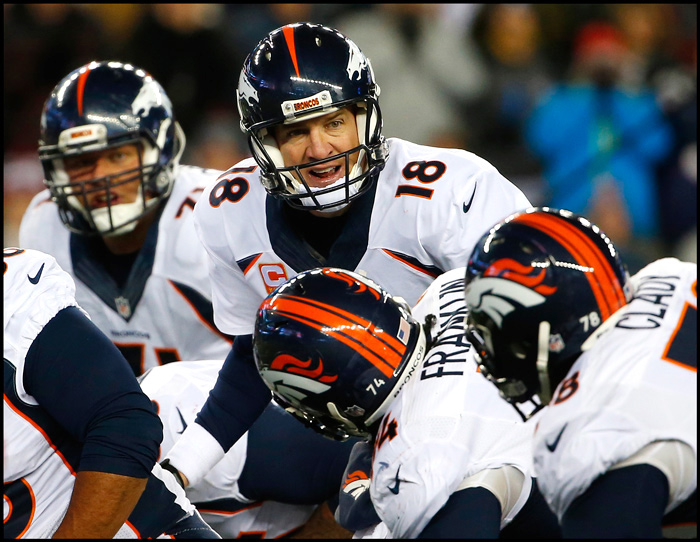 Image © Winslow Townson
Do you have a favorite sport or event you prefer to cover and is there a dream job you haven’t already got the opportunity to shoot?
My favorite sport to cover has always been hockey. I understand hockey very well and can anticipate the action because I played the game for many years. I love being able to freeze (or blur) the action of such a fast sport. I think one of the keys to being a good sports photographer is to have a good understanding of the game you’re shooting and its tendencies so that you can better anticipate what will happen. After all, to make a great action picture you have to have your camera in the spot before, or as the action is happening. 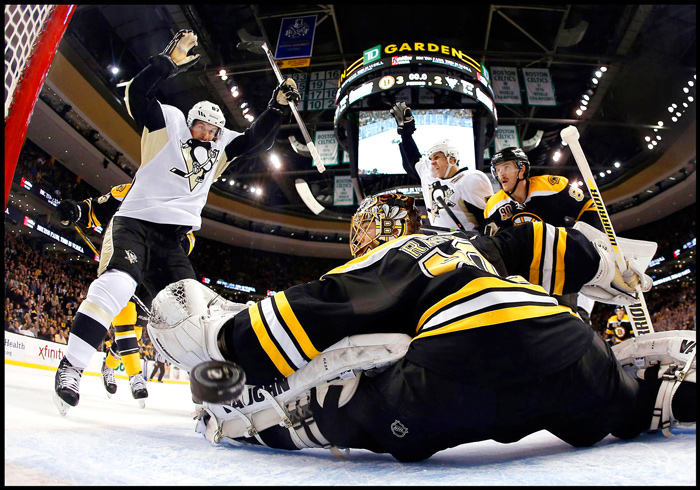 Image © Winslow Townson
As for the second part of your question, I’ve been lucky to cover most of the major sporting events worldwide already. But what I would still like to cover are some sports obscure to the United States, which can produce great pictures, like Rugby, Cricket and Irish football. One obscure sport that I recently photographed was hurling. The action was incredibly fast, had lots of physical contact, had good emotion and you could see [on] the players faces. Faces and expressions can often be key to a good sports photograph.
What is it like working alongside your peers (photographers) at these events? Do you view one another as competition? Are there any unspoken rules of etiquette?
Almost all photographers, especially at the big events, know each other and for the most part get along and are respectful of one another. That being said there is that competitive feeling in everyone. We all want to make THE picture. Photography and Sports Photography is a form of art, so it is very competitive and there is always someone waiting and wanting to take your job. So being competitive, but respectful of others can be a great attribute. The main unwritten rule is to never move in front of someone else so that you get the picture and he or she doesn’t.
Of all the events and games you have covered is there a single moment that stands out that you will remember forever?
Definitely, the Boston Marathon bombing is something I will never forget.
I was covering the Red Sox game a few blocks away at the time of the explosions, but an Associated Press photo editor quickly moved me to the Marathon story. I arrived near the bombing scene already knowing the kind of picture I needed to look for… 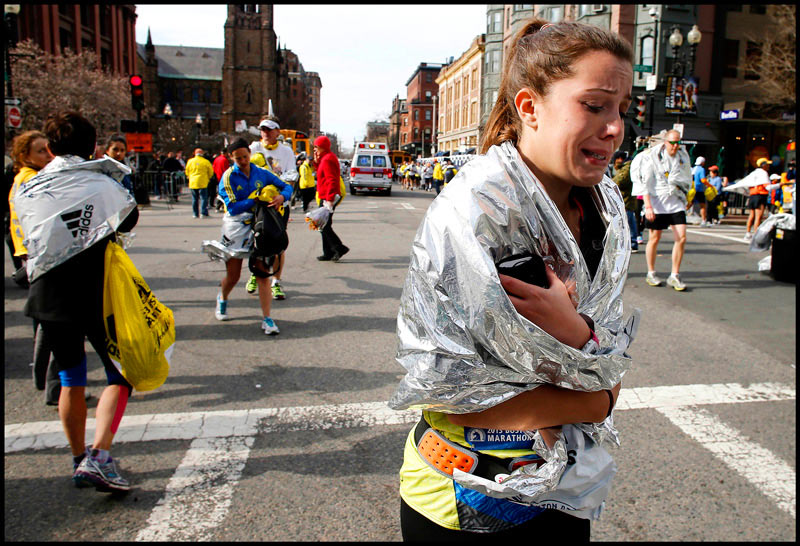 Image © AP Photo/Winslow Townson – An unidentified Boston Marathon runner leaves the course crying near Copley Square in Boston Monday, April 15, 2013.
I wrote a story about my experience covering the bombing for the website SportsShooter.com and if you’d like to read that it can be found here.
How does an aspiring photographer interested in getting into sports photography get a foot in the door?
I get asked this question all the time and if it was 30 years earlier it would be much easier to answer. Unfortunately in this day and age it’s not that easy. With magazine and newspaper subscriptions dwindling the opportunities to work for them are dwindling as well. Obviously shooting as much as you can, anywhere you can is where to start. Remembering to always try different lenses, different angles and different shutter speeds. Always and constantly look at pictures and other peoples work.
I realize that access means a lot, but to get the access you’ll need to approach [a] media outlet (wire service, newspaper, magazine, web site, etc.). I always tell people to not approach these editors until you can show a nice assortment of really good images. With cameras as automatic as they are these days everyone thinks they can do the job right away. But if you approach an editor when your work is not up to par with their standards you won’t get a chance there and it may rule you out from ever getting a chance there [again].
I shot every sporting event (high school, college, pro) that I could get my hands on for over 10 years before I thought my work was good enough to approach any major sports publication, and even then it probably didn’t stand up to the work of photographers who had been doing it for 30 years. Although everyone wants to get to the top right away, make sure you have the quality of images that the newspaper, magazine or wire service is used to seeing before you approach them.
I recommend finding [a person] in the business to critique your work and give you constructive critisism and suggestions. No one likes to hear that their work can improve or that they could’ve done something different, but you need to be open to constructive critisism. There are also a lot of good workshops nationally that give you the chance to learn from and connect with experienced photographers and editors. I attended a sports photography workshop in 1990 and remember a Sports Illustrated staff photographer looking at a slide show of over 200 images the students had taken the previous day. He actually only liked one completely. And his critique of all the others was spot on. It was hard to hear but he was right and it was constructive.
As a photo journalist you are confined to certain rules of ethics in journalism as it regards to photo manipulation…how does ON1 fit into your workflow?
Any good, respected photojournalist knows and adheres to the rules of ethics. Those of us that worked during the days of developing our own film and making prints in a darkroom, I believe better understand the ethics of photo manipulation. If you couldn’t do it in a darkroom you can’t do it with software. I love ON1 software and I think it has its place in photography, but when I’m shooting a journalism assignment, including sports, I have to be very careful when using any software. ON1 has the potential to make a situation not look exactly as it did when I took the picture a very powerful application. Correcting color and tweaking the contrast is usually all I will do with ON1 regarding journalism assignments. But when it comes to Instagram, or other projects, which don’t have the rule of ethics to follow; like portrait work, [or] making posters and prints for someone, or doing graphics for websites, ON1 is a blast for those of us who have always had to follow the rules of ethics.
Check out more of Winslow’s work at his website and follow on Instagram.

One comment on “Interview with photojournalist and ON1 user Winslow Townson”