We had some great (and unique) submissions for 2020’s first Plus critiques session. The video has been posted and can be viewed by clicking on the thumbnail above.

Photos of the month

Our friends at Lume Cube donated three of their new Lume Cube 2.0 LED lights (which Hudson and I love, and are part of our essential kit) as prizes for January’s critiques. We chose our two favorite photos from the group, shown below, and drew one random name from the list of all contributors this month. Let’s take a look: 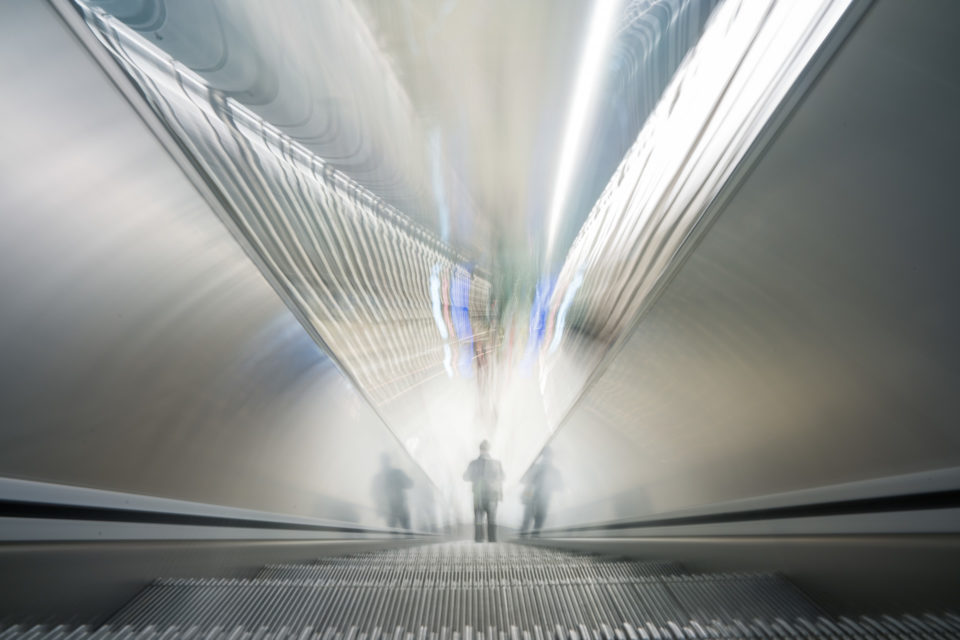 Christian Riedl has shown some beautiful work in the Plus galleries, and this month he wowed us with an unusual — and mesmerizing — handheld, long-exposure shot taken on a moving escalator. This is one of those photos that just captivates the viewer. At first glance, there’s a bit of “how did he do that?”, but that lessens when you start studying the composition, with its strong lines, ghostly subject (reflected not once, but twice!), and stark coloring. It is not a conventional shot in the least, which makes it all the more impressive. Excellent work, Christian.

Desperate for Summer, by Norry Cutler 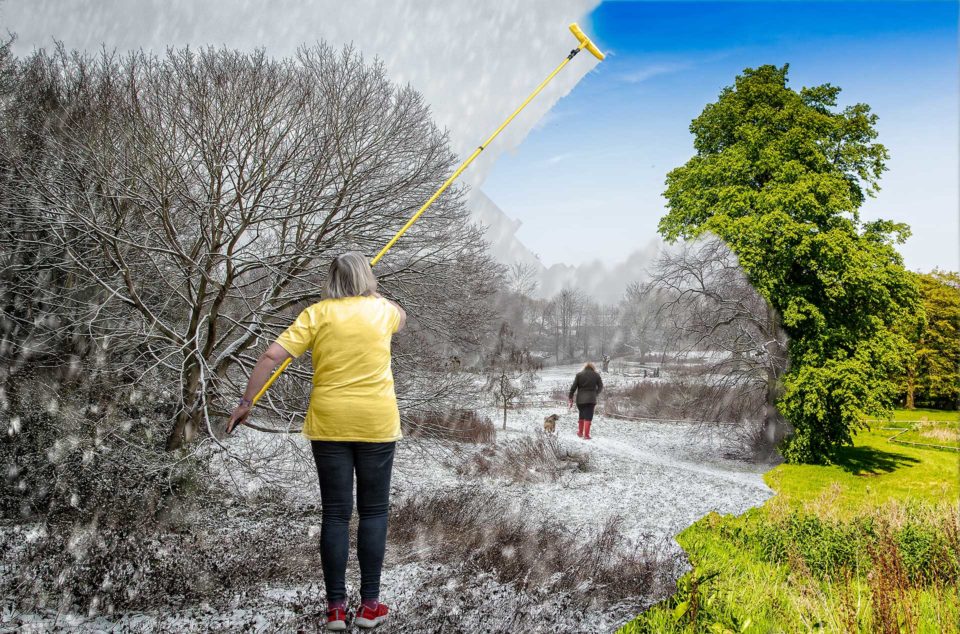 Norry Cutler’s photo is an example of a composite executed perfectly. From the concept (shots taken in identical places throughout the year) to its execution in post-production, Norry did a wonderful job. As one person in our office noted, this looks like it could be a wall mural in some city or town.

Creating good composites is one of those things we talk about frequently in the critiques. They’re hard to do properly: making the elements of a composite work together harmoniously is a difficult and often time-consuming task. You have to start with two or more good — and compelling — components, and be painstaking about blending them together. Norry did the necessary work here, and the result a fun and engaging image.

Congrats to both Christian and Norry, as well as Amy Perlmutter, who was chosen as the winner of the random drawing from the pool of submissions. Send your mailing address to critiques@completedigitalphotography.com, and we’ll get your Lume Cubes into the mail in the next few weeks.

Other compelling work in January 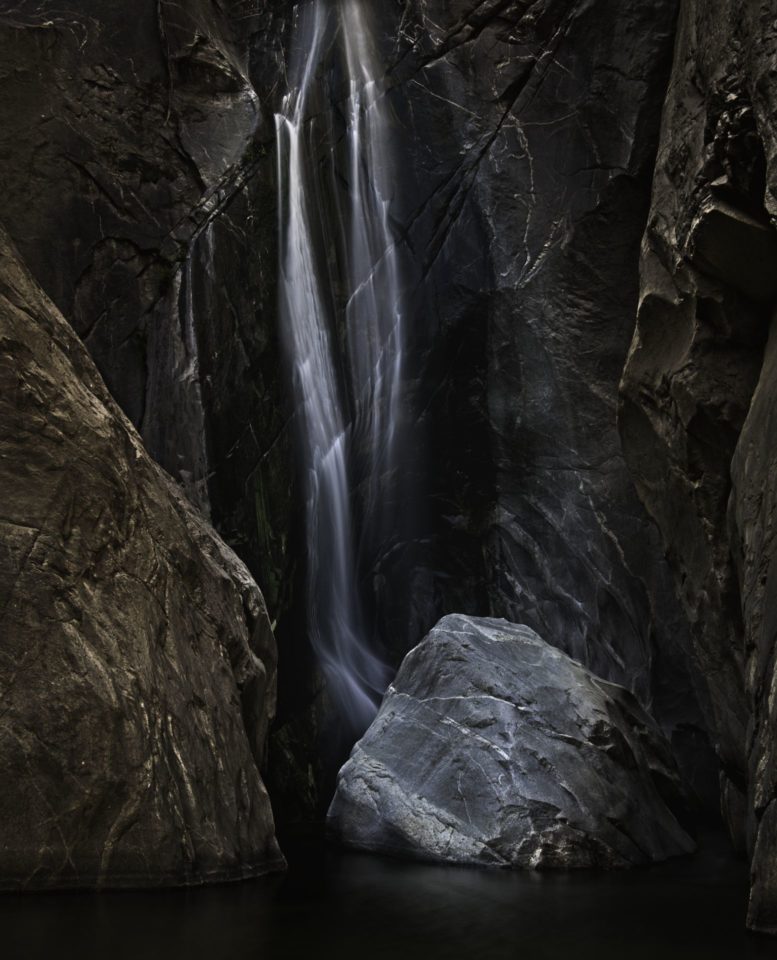 Waterfall photos have long been the provenance of ON1 photographers, peaking with Brian Matiash’s tenure as staff guru a few years ago. Steve Abley turns the conventional waterfall pic on its head with a lovely photo of a low-flow waterfall from the Palm Springs area of California. Everything is well done, from the soft light in the canyon (anchored by the gray rock at the bottom), to the shutter speed capturing the wispy falls, to the soft, glassy pool at the bottom of the frame.

Most of the popular waterfalls in the Pacific Northwest have been ably captured by many photographers, but they have tended to be lush and full of water. There’s nothing wrong with them, but Steve’s shot is a wonderful alternative. Great work. 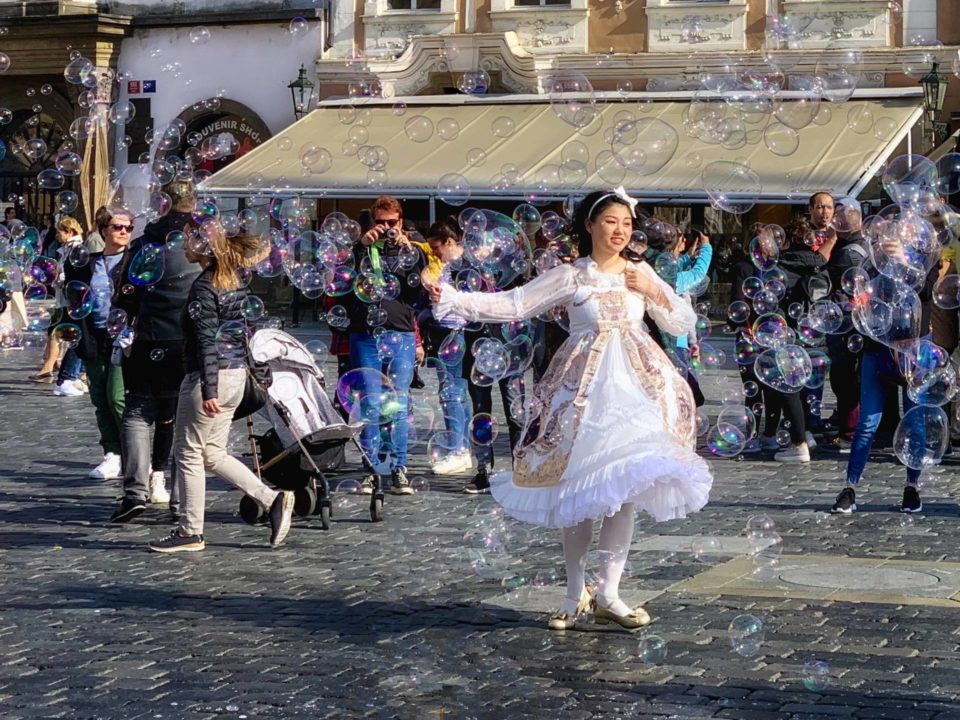 A fun street capture, John Cotham’s photo is a nice example of seizing the moment, with his iPhone XS no less. The bubbles add to the fun, but aren’t a distraction, and the overall composition is spot on. We’d love it if the woman in front was looking into the frame, but that’s one of the things that it’s hard to plan for when shooting on the street. Well done, John. 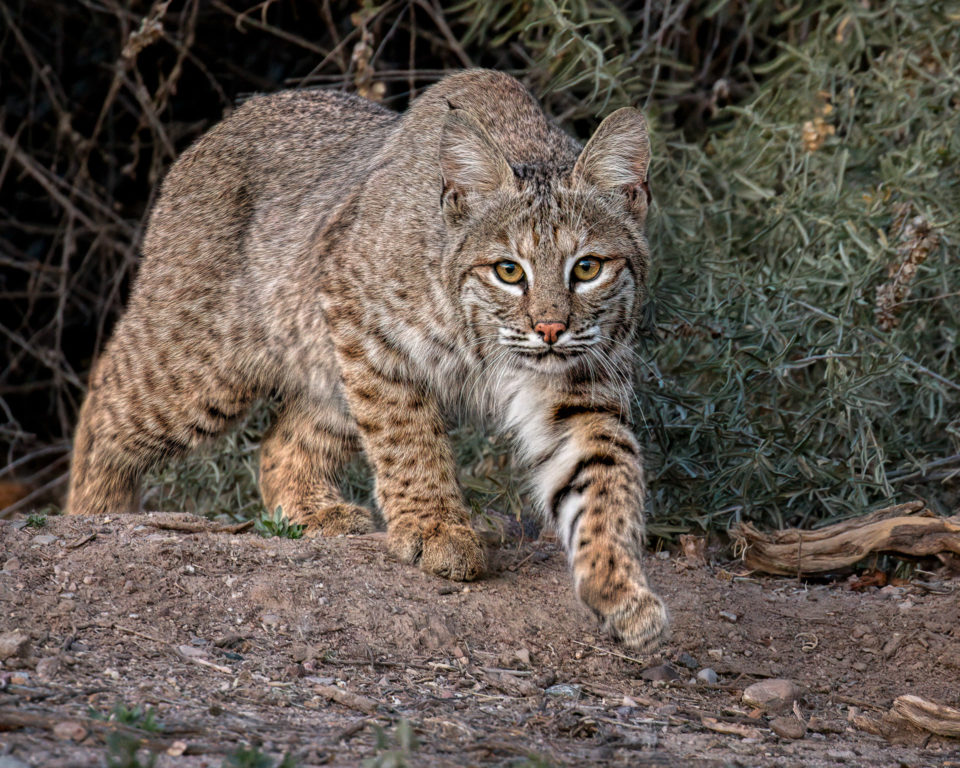 It’s tough to get a classic wildlife shot of the notoriously reclusive bobcats, but Paule was lucky enough to snag this shot at the Sweetwater Wetlands park in Tuscon, Arizona. It’s a wonderful photo. The sharpness in the eyes and face is captured just right, along with a strong sense of forward movement in the cat’s pose. We might do a bit of local adjustment work in the bushes to darken them slightly, but that’s a small point. Way to be patient for the right shot, Paule!

The Old Men @ the Lighthouse, by Stefan Migalski 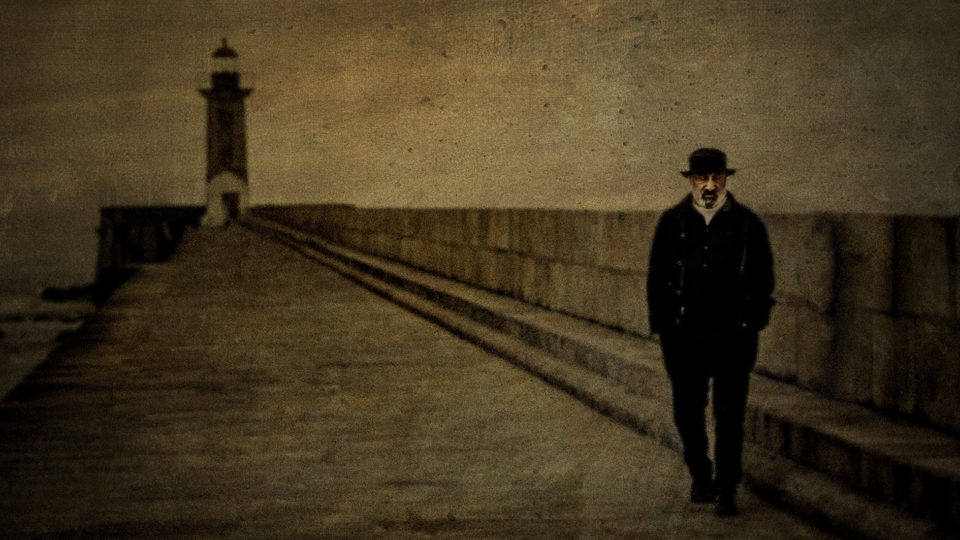 If you’ve been following our critiques for a while, you know that we almost always tell photographers to back off on the textures in their work. Stefan’s photo is not one of those. The textures and the moody processing help to accentuate the composition, with its great lines and the repetition of the man’s stance with the lighthouse (right down to the man’s cap, repeated in the top of the building). Hudson would back off a bit (a tiny bit) on the sharpness and exposure of the man’s nose, but this is darn close to a perfect photo. Print it, Stefan!

Lily Not Lotus, by Edward McDonnell 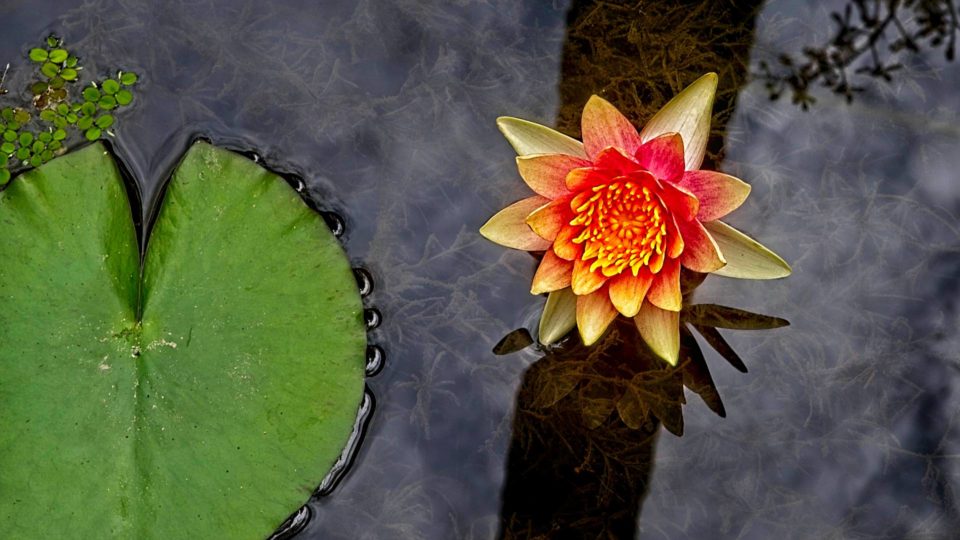 We talk a lot about the “rules” of composition, but they are just guidelines that we use when composing. From time to time, the rules get thrown out, resulting in a compelling image. Edward McDonnell’s Lily Not Lotus definitely fits this condition. Witness the two seemingly discordant subjects, lily pad (cut off at the edge of the frame) and lotus flower/background that bisects the image, as well as the odd shadow of the branch coming out of the corner. Yet Edward’s photo is compelling, with everything anchored by the beautiful textures in the water and the bright colors in the pad and flower. We’d back off a bit on the contrast/sharpness in the lotus, but there’s nothing else we’d really do with this image, other than printing it. 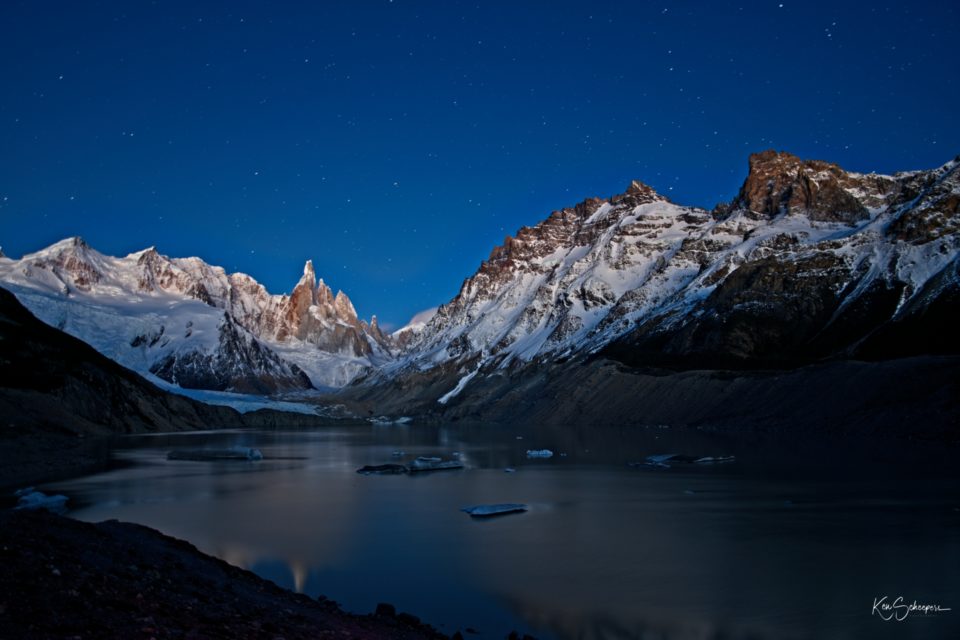 Ken had the distinct pleasure of attending Hudson’s Patagonia workshop last fall, and this photo of blue hour is a great keepsake of an “epic workshop,” in Ken’s words. The mountains are perfectly lit and processed, the sky pops, and the water is beautiful. It certainly makes me wish I had been there.

We’re running out of room, but here are a few other photos that we felt were worth mentioning, in brief:

Cone, by Werner: Lovely black and white with gorgeous lines.

Someday in Fall, by Donghee Kim: A beautiful moment, exquisitely captured and processed.

Check out the video above to see our thoughts on the more than 20 photos chosen from the January critiques gallery. Thanks, as always, for posting your work, and thanks to Lume Cube for sponsoring this month’s critiques.